At age 21 I experienced intense wakefulness (the real image of brilliance) for just a week. But after that, I returned to my uneventful days, and even though I tried to convey my spiritual and dynamic experience, I was not sure what it was like and was not able to prove it with words.

25 years later, I came across some words in Buddhist literature “Prajñāpāramitāhṛdaya” (The Heart of the Perfection of Wisdom).

是無上咒         It is transcendence and nothing goes beyond it

是無等々咒     It has no walls and is beyond comparison; it has swallowed all

(It has no equal)

能除一切苦     It leads to wakefulness without any hindrance

My lifework is, while seeking business in the field of beauty, to spread across the world the simple thing I have perfected as pure philosophy by seeking axioms, formulas and laws in the providence of the natural world and logicalizing them to search for “the real image of brilliance.”

As the culmination of my work I established the organization called “SPC GLOBAL” on May 10, 1966.

Under the charter mentioned above, this organization exists in the beauty industry of Japan, and its infinite potentialities have attracted high expectations.

I’m convinced that because the SPC Charter is based on pure philosophy, more than 7.3 billion people should recite it each day to sublimate their awareness.

To pursue “the real image of brilliance,” I asked Mr. Yuichiro Miura, the 80-year-old mountaineer who pushes his way to his destiny motivated by his sense of mission, to put up the UN Flag, a sacred symbol of peace, on top of the world’s tallest holy Mt. Everest. As of May 23, 2015, this symbol of peace is treasured under my care.

In order to unify the world’s 193 countries, the human ability and the political power are required as they make it possible to radically change the awareness of mankind on earth, and it is necessary to bring up awakened people.

I have high hopes for the future of Ms. Malala Yousafzai who can lay down and risk her life to work for the peace and order of more than 7.3 billion people in consideration of their destiny, fate and fortune.

I would like Mr. Ziauddin Yousafzai, Malala’s affectionate father and educator who sent a message to the world saying at a TED conference, “I did not clip her wings,” to hand her the symbol of peace, the flag I treasure which was once on top of Mt. Everest and which is filled with people’s earnest wishes.

This is my will.

Next time I will give a message entitled “January 1, 2015: Universal Declaration.” 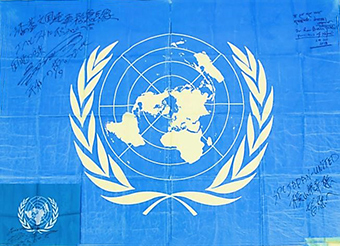